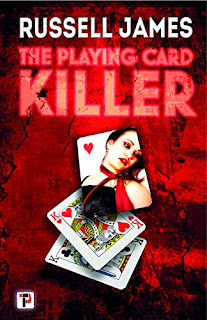 Wow.  First read for a brand new author for me and I absolutely loved it.  There truly is no greater thrill than finding a new writer whose work keeps you guessing from start to finish.  OK, I can think of one or two greater thrills, but you get the point.

Brian is off his meds and having the most disturbing nightmares.  He's seeing the murders being committed by a serial killer who's been dubbed the Playing Card Killer by the press.  His girlfriend, Daniela, is less than happy he's gone med free, as a matter of fact, she's done unless he reconsiders his decision.

For a while, the reader is lead to believe, Brian is actually the killer and that's what the police believe when he shows up with what he's
seen in his dreams.

That's enough.  To tell you more would spoil all the surprises.  Buy this book now and add it to your TBR pile.  You can thank me later.  And you will.

The story itself was rather simple, but the execution in writing took the tale to a higher level.  A masterfully crafted, horrifically powerful story.   Expect the unexpected in this deliciously twisted tale.

The playing card KIller is fast-paced and brilliantly plotted.  And then there are my five favorite words in the entire book...

"It was time for revenge."

I whole-heartedly recommend this near-perfect thriller.

From the author's bio - Russell R. James was raised on Long Island, New York and spent too much time watching Chiller, Kolchak: The Night Stalker, and Dark Shadows, despite his parents' warnings.  Bookshelves full of Stephen King and Edgar Allan Poe didn't make things better.  He graduated from Cornell University and the University of Central Florida.

After flying helicopters with the U.S. Army, he now spins twisted tales, including horror thrillers Dark Inspiration, Q Island, and The Playing Card Killer.  His Grant Coleman adventure series covers Cavern of the Damned, Monsters in the Clouds, and Curse of the Viper King.  He resides in sunny Florida.  His wife reads his work, rolls her eyes, and says "There is something seriously wrong with you."
Posted by Frank's Horrible Book Reviews at 3:07 PM