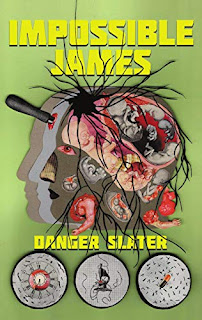 Remember how strange, confusing, yet beautiful the Talking Heads song, "Once In a Lifetime", was the first time you heard it?  Well, I just got a similar vibe from Danger Slater's new novel, Impossible James.

"Jimmy Watson Jr. was an American inventor, chemist, and former head of research and development for Motherlove Incorporated, often cited with the discovering the mathematical formula from which both the anti-entropic drug Infinitassium, and the transglobal biological disaster The Gray Tide, were both synthesized. He is widely considered responsible for the end of the world [citation needed]."

From the wildly perverse mind of Danger Slater comes a novel I won't soon forget.  To say a DS story is wacky would be a gross understatement.  Impossible James was like a tonic for the soul.  OK, maybe not for your soul, but certainly for mine.  It's so difficult to put a finger on Slater's writing style.  It's almost as if Douglas Adams had an Evil twin.  Trust me, that's no more preposterous than the story I just read.

Danger Slater is an acquired taste.  His writing is not for everyone, but if you're willing to let go of all your preconceived notions of what a book should be, you might find yourself enjoying this unusual world.

Published by Fungasm Press, Impossible James is available for pre-order in both Paperback and e-book formats.  Actual release date if June 15, 2019.

From the author's bio - Danger Slater is the Wonderland-award winning author of I Will Rot Without You, Puppet Skin, He Digs a Hole, and other titles.  He lives in Portland, OR and has a cat named Bubbles.  To his knowledge, he’s never been cloned.
Posted by Frank's Horrible Book Reviews at 9:21 AM