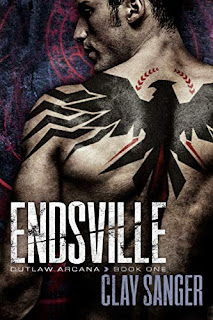 Clocking in at 457 pages, Endsville (Outlaw Arcana - Book 1) could certainly be considered epic and that would be an apt description of Clay Sanger's dark urban fantasy crime novel.

The book's cryptic opening sets the stage for the carnage to come...

"No one loves a crow.  Scavengers.  Thieves.  Liars.  Harbingers of death. Loyal to and beholden to no one but their own kind.  Drawn to the chaos and carnage so they can pick gold from the bones.  Good, bad, indifferent.  A crow does what a crow does.  Nothing commands a crow.  Not men.  Not kings.  Not gods.

The House of the Crow lives up to its namesake."

As you may have guessed by now, The Crows are a crime family, led by Victor St. John and his wife, Fiona.  Not all blood, but all brothers and sisters.  Notable among the family are Gabriel St. John, Captain of the Crows, and his sister, Delilah...

"Delilah was a sorceress, by trade and profession. No petty dabbler.  No one-trick pony.  Through her mother’s lineage, she came from a long and storied tradition.  Most practitioners in the City of Angels spoke Delilah St. John’s name in low and reverent tones."

Mr. Dante Washington, head of another criminal organization calls upon the special services of the Crows when a large sum of money in his possession goes missing.

Sanger's the real deal.  A talented writer with a wonderful gift for description...

"He saw the photo of a man, plain and dull, some middle-aged white guy dressed in a gray suit that reminded Gabriel of a Texas rancher on a Sunday afternoon.  He wore a thin goatee and a long brown ponytail.  Dude had glasses that belonged on a cartoon character.  He looked like he sold lawn equipment at Home Depot and collected butterflies on the weekend.  Maybe he had lived with his mother until she died, after which he had inherited the house and all her Precious Moments figurines.  Gabriel didn’t know him from Adam."

I haven't read a crime novel in a while and this is a good one, made better by the special skills possessed by various members of the brood.  Let's call Endsville a solid mix of crime and urban fantasy.  Kind of like a Dresdin Files novel, but grittier, darker and filled with the most amazing fight scenes.  So different from anything I've read in ages.

Don't look for any "good" guys in Endsville.  They are all criminals, but that's OK.  It's all about the story and it's a good one.  One of those reads where it's not so much about the destination.  It's all about the journey.  This is epic urban fantasy.  So many wonderfully fleshed out characters.  Blood and guts everywhere.

Published by Crossroad Press, Endsville (Outlaw Arcana - Book 1) is available in both paperback and e-book formats.

From the author's bio - Clay Sanger is a professional technogeek by day and a writer of fantasy, science-fiction, and horror the rest of the time. A life-long lover of all things wild, Clay spent much of his early adulthood wandering the four corners of the country in search of the weird and wonderful, the dark and the light. As chance would have it he found them. After meandering far and wide he returned to his native Ozarks where he lives with his dazzling wife, their sons, and a menagerie of mythical creatures both real and imagined.
Posted by Frank's Horrible Book Reviews at 2:06 PM