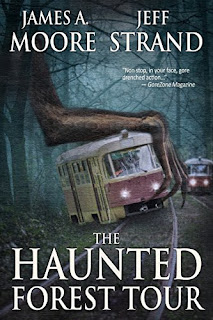 Take Jurrasic Park and replace the dinosaurs with monsters of every conceivable shape and size and you have some idea of the plot for The Haunted Forest Tour.

A forest sprouts up in the middle of the desert in New Mexico.  The forest is populated with deadly creatures which defy the imagination.  Along comes a visionary who manages to turn the forest into a profit-making enterprise.  Rails are laid and Trams begin running through the forest.  The same way they do through some wildlife reserves.

Everything was fine until one fateful day, when it all went off the rails, literally.

"The woods were almost quite.  Almost, because Lee had heard several things moving nearby.  Big things, little things, wet-sounding squishy things and at least one thing that was big enough he could see the silhouette moving through the trees at a height of at least thirty feet.  The good news, so far, was that none of them had come looking for dinner."

Just when you think things aren't making any sense, it all comes together, and a way out finally appears for the remaining survivors, but can they escape before being devoured?

"'It all makes sense,' Mark said. 'Well, no, no, it doesn't make sense at all, but there's something going on, and this is the only solution that makes any sense whatsoever, even if it makes no sense. Am I making sense?'"

I recommend The Haunted  Forest Tour (for readers - not as an attraction,).

The Haunted Forest Tour is available in paperback, audio, and Kindle formats.  BTW, if you subscribe to Kindle Unlimited you can read it at no additional charge.  Also, if you are an Amazon Prime member you can read it for FREE using the Kindle Owners Lending Library.

From the authors' bios...

James A. Moore is the author of over forty novels.  He has twice been nominated for the Bram Stoker Award and spent three years as an officer in the Horror Writers Association, first as Secretary and later as Vice President.

Jeff Strand is a four-time nominee (and zero-time winner, but c'mon, he lost to Stephen King TWICE!) of the Bram Stoker Award.  He is a two-time nominee and one-time WINNER!!!! of the Splatterpunk Award.  His novels are usually classified as horror, but they're really all over the place, almost always with a great big dose of humor.   He lives in Atlanta, Georgia with his wife and one gigantic freaking cat.
Posted by Frank's Horrible Book Reviews at 7:42 PM