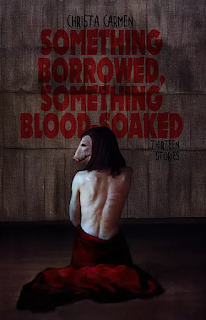 When asked if I'd like to post the excerpt from Crista Carmen's collection  Something Borrowed, Something Blood Soaked, my reply was one word, "Send."  I'm in the middle of reading this right now and I've enjoyed every story so far.  Here is just a taste of what to expect.


The trees were fire and the sky was panicked birds and the horse was made of bone.


She knew the horse would not walk forever.  She also knew that when the horse could go no farther, she would trade her Hell on Earth for one beyond her capacity to conceive.

On the day the water turned to poison, she had done the bad thing again.  When her father appeared before her, she was certain it was to scold her for her atrocious, perverted ways.  But when her father opened his mouth, a river of red ran out in place of reproach.  In a revelation of horror, she remembered her father guzzling the glass of water from the faucet, and she gripped her favorite stuffed creature—a gift that she had not deserved—as the gore rushed from between her father’s lips, hiding her face in its fur so she would not have to see.

She heard the muffled thwump when her father’s body hit the floor.  By then, her brother had drunk the water too, (by then, who hadn’t?) and when he saw their father in a frothy sea of unrelenting red,
he opened his mouth to scream.  His insides came out instead of sound.

She watched as the mundane setting of their living room became an estuary of brackish blood, her brother’s red mixing with her father’s.  The book that had taught her about brackish water and estuaries and other interesting, scientific things lay open on her desk upstairs.  It would remain there now, for an eternity.  Unless the water cleared and there was anyone left to drink it. 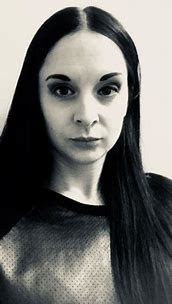 Follow along this tour with the hashtags: #SomethingBorrowed #Unnerving #PsychologicalHorror

A young woman’s fears regarding the gruesome photos appearing on her cell phone prove justified in a ghastly and unexpected way.  A chainsaw-wielding Evil Dead fan defends herself against a trio of undead intruders.  A bride-to-be comes to wish that the door between the physical and spiritual worlds had stayed shut on All Hallows’ Eve. A lone passenger on a midnight train finds that the engineer has rerouted them toward a past she’d prefer to forget.  A mother abandons a life she no longer recognizes as her own to walk up a mysterious staircase in the woods.

In her debut collection, Christa Carmen combines horror, charm, humor, and social critique to shape thirteen haunting, harrowing narratives of women struggling with both otherworldly and real-world problems.  From grief, substance abuse, and mental health disorders, to a post-apocalyptic exodus, a seemingly sinister babysitter with unusual motivations, and a group of pesky ex-boyfriends who won’t stay dead, Something Borrowed, Something Blood-Soaked is a compelling exploration of horrors both supernatural and psychological, and an undeniable affirmation of Carmen’s flair for short fiction.

Christa Carmen is a writer of dark fiction, and her short stories have appeared in places like Fireside Fiction Company, Unnerving Magazine, Year's Best Hardcore Horror, Outpost 28, DarkFuse
Magazine, and Tales to Terrify, to name a few.  She has additional work forthcoming from Lycan Valley Press Publications' all-female horror anthology, Dark Voices, and her debut fiction collection, Something Borrowed, Something Blood-Soaked, was released in August 2018 by Unnerving.


Christa lives in Westerly, Rhode Island with her husband and their ten-year-old bluetick beagle, Maya.  She has a bachelor's degree from the University of Pennsylvania in English and psychology, and a master's degree from Boston College in counseling psychology, and she's currently pursuing a Master of Liberal Arts in Creative Writing & Literature from Harvard Extension School.  Christa works at a pharmaceutical company as a Research & Development Packaging Coordinator, and at a local hospital as a mental health clinician.  When she's not writing, she is volunteering with one of several organizations that aim to maximize public awareness and seek solutions to the ever-growing opioid crisis in southern Rhode Island and southeastern Connecticut.

“Christa Carmen’s 'Red Room' is a different beast altogether.  This story has some wicked imagery, a sinister and brooding atmosphere, and a terrific ending. I’d go as far to say that this is one of the best short stories Unnerving has published in the magazine." – The Grim Reader

“I was pulled in from the first story: ‘Three Cheers for Sweet Revenge,’ by Christa Carmen.  It was also one of my favorites and I have to say that the title gave me a dark chuckle when paired with the band mentioned in the story.” – Sci-Fi and Scary


If you would like to review Something Borrowed, Something Blood-Soaked or feature Christa with an interview or guest article for a media publication, blog, or author blurb, please e-mail Erin Al-Mehairi, publicist, at hookofabook@hotmail.com.
Posted by Frank's Horrible Book Reviews at 6:54 PM