Review: Nothing You Can Do - by Ed Kurtz 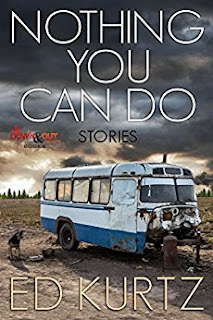 Nothing You Can Do is the first collection from genre writer Ed Kurtz.  Seventeen stories of hard-boiled crime.  Most of them have been previously published, with the exception of the final story, which appears here for the first time.

Unless you are a hard-core Ed Kurtz fan, chances are pretty good you haven't read more than a handful of these tales.

In the Neighborhood - This is an outstanding start to the stories Kurtz has assembled for our entertainment.  Van Duong owns a pizza shop, but a group of bad boys remember him from Vietnam.  Needless to say, things don't go well for the VC.

Buffalo Squeeze - I learned something new here.  A "Buffalo Squeeze" is a pose struck by an ecdysiast (stripper to you and I) in which the arms are crossed before the breasts emphasizing their cleavage.  Violent fun.

Marla's Eyes - There's a thin line between nightmare and insanity.  In his story notes, the author suggests thinking of this period piece as the Downton Abbey Halloween special.

Roadbeds - This was the author's first ever flash fiction crime story, about what happens after dark at a construction site.

Dogs Will Hunt - Features one of the best lines in the book.  In describing an abandoned church turned meth lab...

"There sure as hell wasn't any grace left in this place, amazing or otherwise."

Dog Will Hunt is certainly not a happy tale, but then few of the stories found in this collection are.

Pegleg - All you need to know about this crime caper can be summed up in a single sentence.  "Porky's leg is the safe, you get the leg, you get the money."

Amore Violenta - A man, his wife, and his lover.  A violent affair.

A Good Marriage - This short appeared in The Best American Mystery Stories2014. "Killing one's wife is a tense business, as it happens."

The Trick - One of my favorite reads in an exceptional collection.  Kurtz brought his A-game to this story set predominantly in a NYC bathhouse.  So many great lines, but my personal favorite was...

"My ship had come in all right, but it kept on sailing into the night and I'm not a very good swimmer."

Third Wheel - Good story about, you guessed it,  a third wheel.

Nothing You Can Do - The title story about a very expensive night in a European brothel.

Hell Broke Loose - Based on true events.  The story of the "servant-girl annihilator."

Tanglefoot - The only piece in the collection not previously released.

The language is just what's called for in stories like these...

"...had a man bent over next to the cash register, looking for all the world like he was about to indulge in some maximum security romance."

"The house smelled like wet dog and warm hot dogs."

While not quite perfect, Nothing You Can Do comes pretty damn close.  There are many similarities between horror and crime fiction and while this collection falls mostly in the latter category, I really enjoyed Kurtz's first collection and look forward to many more.

Nothing You Can Do is available now in both paperback and e-book formats from Down & Out Books.

From the author's bio - Ed Kurtz is also the author of Nausea, Angel of the Abyss, The Forty-Two, and The Rib From Which I Remake the World (do yourself a favor and read that one ASAP).  Ed is a bit of a wanderer and currently makes his home in Connecticut.  Now that I've told you that, he'll probably up and move again.