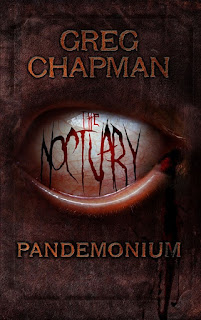 
I first read The Noctuary more than five years ago, so I was happy that Greg Chapman decided to incorporate the original novella in this new, longer, work based on his own source material.

It all starts when writer, Simon Ryan, begins conversing with his muse who reveals himself as Meknok, the thing in his dreams. Meknok offers Simon a rather unique opportunity.  To rewrite his own history.  Wow.  What a concept?  How many of us would love to put pen to paper and thereby change our lives for the better? More money, a better job, a more loving companion.  Sounds simple, but the reality is so much more complex.

In Pandemonium Simon Ryan has gone missing until one day a manuscript, purportedly written by the awol writer, shows up at the office of his former Psychiatrist, Dr. Desmond Carter.

As a result, the Doctor's life is about to change, and not for the better, as all hell breaks loose.

1  -  The capital of Hell in Milton's Paradise Lost
2  -  The infernal regions :  hell the demons of Pandemonium
3  -  Not capitalized :  a wild uproar :  tumult Pandemonium erupted in the courtroom when the verdict was announced.

After reading The Noctuary: Pandemonium it seems as if Chapman managed to roll all three of those definitions into one.

If you're tired of the same old horror story be sure to add this one to your watchlist.

The Noctuary: Pandemonium is available in both paperback and for the Kindle.  if you subscribe to Kindle Unlimited you may read it at no additional charge and if you're an Amazon Prime member you can read Hollow House for FREE through the Kindle Owners Lending Library.


Posted by Frank's Horrible Book Reviews at 4:48 AM