Review: Congregations of the Dead (A Griffin and Price Novel) - by James A. Moore & Charles R. Rutledge

The central characters throughout the book are Sheriff Carl Price and Private Investigator Wade Griffin.  At the beginning of the book, the Blackbourne family (a pre-human race whom the Cherokee tribes of Georgia called "the Moon-Eyed ones") was up to its old tricks, trying to summon one of the outer gods to Earth.  Led by the family matriarch, Siobhan.  Thankfully, things did not go well.

The summoning had failed and the outer god had fallen back into the void, taking Siobhan with him.

There's the story about a cretin called Tadpole who cozies up to single moms with young daughters and eventually sells the daughters into sex slavery.  Price and Griffin put an end to his shenanigans post haste.

But here's the big story. There's a pastor who's come to town by the name of Reverend Lazarus Cotton.  He's been holding outdoor revivals and seems to be tied to the disappearance of another young girl.

What Price and Griffin uncover may lead to their demise, unless they get help from a most unlikely source.

"'We might have to do something slightly illegal.'  'And wouldn't that be a shame?  Me being the Sheriff and all.' 'Scandalous.' 'I'll pick you up in half an hour, Wade. 'I'll be ready.'"

Here, the writers paint a perfect picture of Betty, a waitress at the Rabbit Hutch Diner...

The woman was in her fifties and looked like a long-time anorexic, but that was just the way she was built.  Her hair was exactly the color of red that comes from generic hair dye and her makeup brought to mind a few of the clowns he's seen the last time he went to the circus - not a comforting thought as he absolutely hated clowns - but aside from the artificial attempts to look twenty years younger she was a sweet lady.

Congregations of the Dead is great fun and I eagerly look forward to the next book in the series, A Hell Within.

Congregations of the Dead (A Griffin and Price Novel) is published by Cohesion Press and is available in both paperback and e-book formats.

From the Authors' bios... 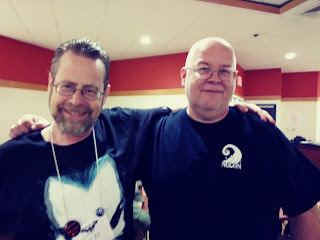 James A. Moore is the award winning author of over twenty novels, thrillers, dark fantasy and horror alike.  The author cut his teeth in the industry writing for Marvel Comics and authoring over twenty roleplaying supplement
s for White Wolf Games.  He is currently at work on several additional projects.

Charles R. Rutledge - After a couple of decades teaching karate, writing comic books, and spending way too much time reading mysteries, SF, horror, and assorted other genres of fiction,  decided it was time to actually turn out some fiction of his own. Charles is the co-author of three books in the Griffin and Price Urban Fantasy/Horror series, Blind Shadows, Congregations of the Dead, and the forthcoming A Hell Within, all written with James A.Moore.  A lifelong resident of Georgia, Charles lives in the Atlanta area where he is currently hard at work on other writing projects. He does have a cat, but writers always mention their cats so there you go.