Review: When the Clock Strikes 13 - edited by by Kenneth W. Cain 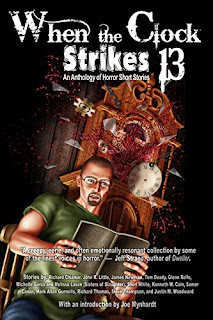 When the Clock Strikes 13 is an invitation-only anthology.  Steve Thompson is a fan of horror and as such he wanted to publish an anthology featuring stories by his favorite authors.  The result is a treat for all fans of the genre.

The Boy In the Pond by Mark Allen Gunnells - A paranormal investigator is hired by a family to rid them of their son's spirit trapped below the ice in their pond.  A brutally haunting tale and a superb opening for this collection.

Open Waters by Richard Thomas - A beautifully written story of a future where we take solace where we can.

Memories by John R. Little - I loved this telling of a family curse which leads to tragic consequences.

Detrition of War by Kenneth W. Cain - Nothing like a good old "creature" story.

Comes the Red Man by Tom Deady - Tom is one of my favorite writers and this is another fine story from this Bram Stoker Award-winning author.  A holy man is haunted by those who perished in a fire which consumed the tent in which he was conducting a service.

Mommy's Girl by Somer Canon - Somer is the real deal and this is a wonderful introduction to her writing.  A local beach kid meets a boy on the boardwalk during a cloud burst and things take a decidedly weird turn.

Taking Up Carpentry by Justin M. Woodward - An abusive step-father gets his due in a rather unique way.  "'Doug isn't a bad man, he's just tired a lot, and you shouldn't test him when he's tired.' On a cold night in January, my sister, Anna, found out just how tired Doug could get,"

Kill Point Club by Steve Thompson - What a fun story.  About a service where you can accumulate, purchase and redeem points to allow you to kill without repercussions, as long as you follow the rules.

Calm Down Time by Richard Chizmar - Molly works the late shift and needs to wind down when she gets home.  Watching the news she learns of a killer on the loose in her neighborhood.  Uh, oh.

Bear by Michelle Garza and Melissa Lason - I'm a big fan of the Sisters of Slaughter and here they give us a very fine ghost story set in the desert of Arizona during monsoon season.

When Arachnids Attack by Sheri White - Why does it have to be spiders.  This wonderfully horrific tale actually gave me chills.

A Song Above by Glenn Rolfe - A post-apocalyptic tale of underground dwellers making an attempt to go topside after years below.

This anthology features many of my favorite authors and those I had not read before had some of the best stories in the collection.  I've already read a number of good anthologies in 2019 and this is one of the best.

Available for pre-order, When the Clock Strikes 13, will be published for the Kindle by In Your Face Books on March 31, 2019.  If you subscribe to Kindle Unlimited you can read it at no additional charge.  Also, if you are an Amazon Prime member you can read it for FREE using the Kindle Owners Lending Library.


Posted by Frank's Horrible Book Reviews at 7:29 AM