Guest Post: Why I Wrote Mars Girls - by Mary Turzillo

This weekend it's all about Mars.  First up, a guest post from the author of MARS GIRLS, Mary Turzillo...

Why I Wrote MARS GIRLS
by
Mary Turzillo


When I was a kid, I had a terror of things I read about in books. Ball lightning. Tidal waves. Giant slugs. A walking severed hand.

But I was really frightened when I first heard of supernovas. I read where the sun would someday go supernova and we would all burn to a crisp. (Later, I learned that humanity would be extinct for others reasons, but that’s irrelevant.)

In its original form, this was a childish idea. For one thing, our sun is too small to go supernova. This was but one way the pop-science books of my childhood misled me.

But my idea of humanity escaping Earth has some validity nonetheless. Humanity could perish in so many ways besides the not-actually-inevitable supernova: plagues, pollution, runaway greenhouse effect, nuclear winter — the possibilities are endless. And I want to think at least some of us, progenitors of a future human race would survive.

In my mind, we had to leave the Earth and colonize other planets. It didn’t matter if most humans died, at least the human race would go on.

I’m not the only person who has this idea. It’s almost a religious belief, this love of our own race. So—Mars would be a good beginning for humanity’s home away from home.

Many years later, my husband, Dr. Geoffrey Landis, introduced me to a visionary scientist-entrepreneur-engineer, Dr. Robert Zubrin, the founder of the Mars Society, an organization that is leading the drive to colonize Mars and author of multiple books including The Case for Mars: The Plan to Settle the Red Planet and Why We Must (1996). After some fascinating conversation, Zubrin told me that he thought that I could be instrumental in the drive to colonize Mars.

I took that challenge seriously.

My Mars stories show that the colonists’ lives are not without problems. After all, obstacles are what make fiction interesting.

So I began a series of narratives about people born on Mars, doing science for humanity, and solving the problems of their extraordinary lives. My Nebula-winning “Mars Is No Place for Children” is about a little girl, Kapera Smythe, who searches for the original Mars Pathfinder rover. That Rover has a name: Sojourner. It’s named after an African-American freedom leader, Sojourner Truth. So I chose to make Kapera African-American, or rather African-Martian.

The other girl in my story, Nanoannie Centime, is a little older, and her path shows the social issues of being a Martian colonist: the fact that her life is lonely (no date-worthy boys) and that she is destined for a life of very hard work.

Enter the other Mars colonists, the Facers. These are people who, like me, believe that humans should colonize the universe, including an exoplanet they believe they have identified as humanity’s true home. They make serious mistakes, however, which leads to problems for Nanoannie and Kapera.
I had a lot of fun creating the Face-on-Mars religion, which is an extrapolation of the ideas of Richard Hoagland (The Monuments of Mars: A City on the Edge of Forever, 1987) and others. I hope you enjoy—and at times even admire—their crazy ideas.

Kapera and Nanoannie also have the problem that Mars is a long way from Earth’s police, and the law doesn’t always protect the innocent.

My husband, Geoff Landis, has his own award-winning Mars novel, Mars Crossing (2000). He has shepherded me through the minefields of Mars research. I watched in an auditorium in Pasadena as Jet Propulsion Lab engineers described the descent and landing of Mars Pathfinder. I got daily updates from Geoff while he was working on Spirit and Opportunity, the two Mars Exploration Rovers. I’ve attended many many presentations at Mars Society conventions.

In short, I’ve tried to make my fictional Mars as accurate as I can: no cheating. Just what engineers and scientists can do to enable people to live and work and explore Mars.

I created take-charge characters and a turbulent society for Mars Girls. I’m planning two more Mars novels, and I hope they’ll inspire readers to push forward the exploration and colonization of that amazing planet that you sometimes see in the night sky, reddish in color and so bright, our next home. And maybe you’ll go there. As astronaut Buzz Aldrin says, “Get your a## to Mars!” 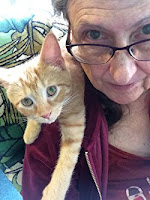 From the author's bio - Mary Turzillo's 1999 Nebula-winner, " and her Analog novel, An Old-Fashioned Martian Girl, have been read on the International Space Station. Her poetry collection, Lovers & Killers, won the 2013 Elgin Award.  She has been a finalist for the British Science Fiction Association, Pushcart, Stoker, Dwarf Stars and Rhysling ballots.   Sweet Poison, her Dark Renaissance collaboration with Marge Simon, was a Stoker finalist and won the 2015 Elgin Award.   She's working on a novel, A Mars Cat & His Boy, and another collaboration with Marge Simon, Satan's Sweethearts.   Mary lives in Ohio, with her scientist-writer husband, Geoffrey Landis, both of whom fence internationally.

Geoff and Mary ponder the question: what would it be like to fence in zero-G? and: What about if we were cats fencing in zero-G?
Posted by Frank's Horrible Book Reviews at 6:58 PM