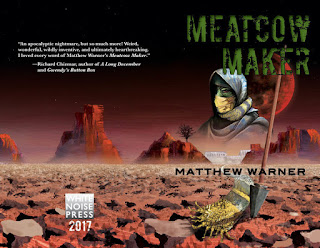 I've made this comment before, but it bears repeating...

You just don't see many chapbooks anymore and certainly none with the quality and attention to detail as those that appear quarterly from Keith Minnion's White Noise Press.

From what I understand, Matthew Warner's Meatcow Maker is the last planned release for the foreseeable future.

The goodness begins with a gorgeous wrap-around cover from Deena Warner and the limited edition chapbook is signed by both the writer and the artist.

There'd been a nuclear war started by the Orange President, whoever that was.

For many years the meatcows served their masters, the skralls.  Genetic creations which allowed their owners to partake of their flesh, which would regenerate in time. (You don't want to know what the meatcows eat).  But now things are changing, crops are being grown, and the meatcows are no longer needed.  Where are they to go?  What will they do?

Meatcow Maker is one of those stories which will stay with you long after it's been read. Recommended.

Meatcow Maker is available, as a signed limited edition chapbook from White Noise Press. For their complete list of chapbooks visit them online at http://www.whitenoisepress.com/shelf/

From the author's bio...In the time since his first newspaper article was published in the 1980s, Matthew Warner's writing career has traveled many avenues.  Now he's primarily a prose fiction writer, preferring the genres of horror, fantasy, and science fiction. Matthew lives in Staunton, Virginia, with his wife, Deena Warner, and sons, Owen and Thomas.


Posted by Frank's Horrible Book Reviews at 4:39 AM