Guest post from author Amy Grech, the author of Rage and Redemption in Alphabet City

Look for my review of this collection of hardcore crime drama tomorrow, but for now, enjoy this guest post from author Amy Grech...

The Origins of Rage and Redemption in Alphabet City


I’ve lived in New York City for 21 years now. When I first moved to NYC from Long Island, it was a much darker place than it is today. Back then, certain neighborhoods, like Alphabet City and Hell’s Kitchen were covered in graffiti and had a reputation for being dangerous sections of the city, where crime ran rampant. These were not places where young, single women had any business being, but one of my good friends lived in Hell’s Kitchen, so I got a taste of that section of NYC on a regular basis, saw the crime firsthand, albeit from a safe distance, witnessed junkies desperate for a fix and got a sense that desperation bred contempt. I envisioned Alphabet City to be the same way, but much to my surprise when I went there to explore in the early 2000s, there was no graffiti to be seen, condos dominated virtually every street corner and self-absorbed hipsters replaced junkies, a crime-haven no more…


A pivotal moment in Rage and Redemption in Alphabet City occurs in the lead novella when Ruby Fuji invites Dr. Trevor Braeburn, an Eye Doctor back to her apartment in Alphabet City after meeting him in a bar, knowing hardly anything about him. A potent cocktail of overwhelming lust, coupled with lax inhibitions leads to poor judgment on Ruby’s part, with tragic consequences for the young girl. There’s Rage and Redemption to be had in Alphabet City once her older sister, Gia and Mr. Fuji discover the culprit and take matters into their own hands. You might say the Eye Doctor set his sights on the wrong girl…


I felt very uneasy after writing that scene, especially because Ruby has unknowingly made herself vulnerable to the lethal whims of a proverbial wolf in sheep’s clothing. I don’t scare very easily, so it’s very rare for me to create a moment that strikes a nerve and lingers.


As a single woman living in New York City, one of my worst fears is that I’ll meet a guy at a local bar who is handsome, smart and after too many Margaritas, invite him back to my place, only to discover after we’ve hooked up, that he has a gun or a knife and intends to kill me. Luckily, all the guys I’ve dated have been pretty sane so far…


It’s an extremely dangerous, impulsive thing for a single woman to do, invite a stranger back to her apartment for a good time. And yet, thousands of single women do so every night in the Naked City. Some people might say these women are being reckless, setting themselves up for a fatal encounter. How much does she really know about him? Sure, she might know what he does for a living, where he grew up when his Birthday is, but she has no way of knowing if he’s a psychopath intent on doing her harm until the macabre deed unfolds. 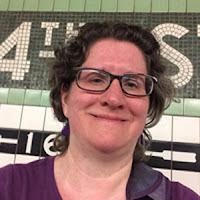 Amy Grech has sold over 100 stories to various anthologies and magazines including Apex Magazine, Beat to a Pulp: Hardboiled, Dead Harvest, Detectives of the Fantastic, Volume II, Expiration Date, Fear on Demand, Fright Mare, Funeral Party 2, InhumanMagazine, Needle Magazine, Reel Dark, Shrieks and Shivers from the Horror Zine, Space & Time, Tales from The Lake Vol. 3, The Horror Within, Under the Bed, and many others. New Pulp Press published her book of noir stories, Rage and Redemption in Alphabet City.  She is an Active Member of the Horror Writers Association and the International Thriller Writers who lives in Brooklyn.
Posted by Frank's Horrible Book Reviews at 7:14 AM